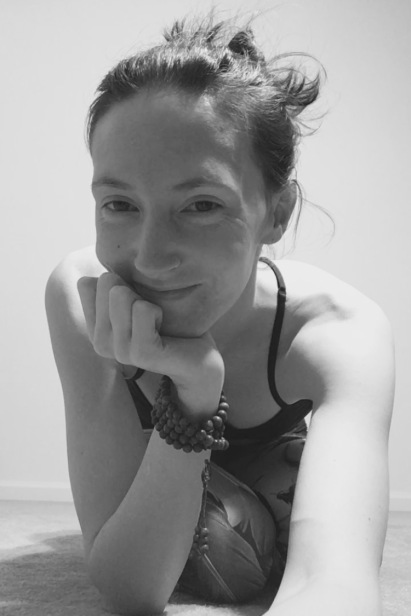 If it weren’t for pain, I wouldn’t have fallen in love with yoga. In 2012, I was suffering from 20 migraines a month and I was mentally and physically spiraling out of control. My neurologist urged me to do yoga. What I didn’t know, was yoga would change my life. Yoga became a coping mechanism for me physically, and I found the meditative benefits valuable too. As a chronic pain sufferer, I was stuck in the “tension causes pain, pain causes tension loop”, and yoga slowly began to break that cycle.

Just when I was really enjoying my practice, I took a hit. I tore my TFCC, a ligament in my wrist, doing firefly. I knew it when it happened. I “limped” along for a year and eventually it hurt too much to practice at all (I wasn’t shown alternate poses or modifications), so I just stopped going. I began to suffer for it too and I shut down.

About a year after my injury I felt called back to yoga. A strong urge. I heard a YTT program was coming to my studio and I wanted to toss myself into the fire. I wanted to be the phoenix that rises from the ashes. I wanted to be the sword that gets forged in the fire, but first I needed wrist surgery.

I did learn a valuable lesson post surgery though and it was: honor your body, have patience, and all comes in time. I couldn’t do down dog for months; I did dolphin. It took even longer for plank on my knees. I felt there was so little that I could do and I was often bitter and frustrated. I learned that modifications can be a valuable tool. I feel that I have a better understanding of chronic pain sufferers and those who need modifications and assists, because I’ve been there.

In 2016, I felt called again- this time to walk a slightly different path. I’m now a student once more! This time, I’m learning Ashtanga and I’m determined to go to INDIA!!

This is me, raw and unedited. Stripped of all inhibitions.

If any of you are looking for some COMFY shoes that are also eco conscious and vegan, check out @bangsshoes!! They are amazing.
Summer days = summer daze
Ugh. I need to get on the mat more. My hip flexors are SOOO tight from all the driving I do, and I’ve lost my back flexibility.
I’ve been trying for years and I finally landed (and held) a hop into a tuck handstand the other day. Go shakti kicks! Still working on this lame-ass (untucked) handstand. 🤣
Decided to jump on the #2017bestnine bandwagon. I’m not sure how the thing works, because I have photos with more likes. Regardless, many of them were unexpected. It’s nice to see a collage of the past.
Anyone else bundle up today on (or off) the mat? It was freezing here. ⛄️❄️💨

Have you trained with me? Do you have something to say? If so, message me your testimonial and I'll put it up on the site! You can also post it on my Facebook or LinkedIn profiles (links down below)